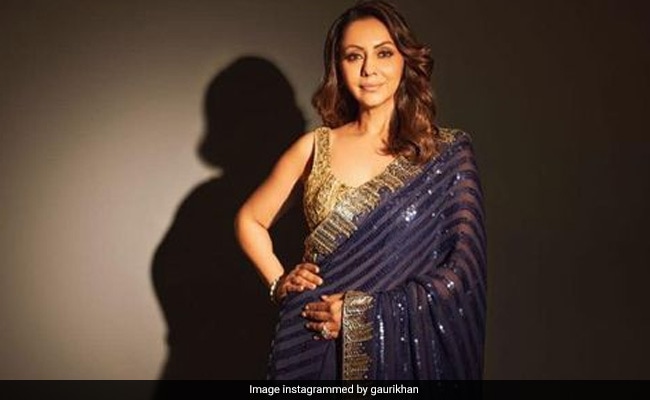 The latest episode of Koffee With Karan 7 saw some of Karan Johar’s closest friends on the couch. Among them, Gauri Khan, Maheep Kapoor and Bhavana Pandey. During the show, Karan Johar spoke to Gauri Khan on her sense of individuality, her work and the tag of being “just Shah Rukh Khan’s wife.” Gauri Khan, who is a film producer, interior decorator, author and now has her own show, spoke about it all and how being SRK’s wife sometimes works against her. “You’ve built an entire brand of your own, you are no longer just Shah Rukh Khan’s wife,” said Karan Johar, recalling an incident where SRK and Gaur’s chartered accountant said that Gauri was the most “profitable member in Mannat” during the pandemic.

“It’s hilarious because once I was having dinner with Shah Rukh and Gauri and we heard that their family chartered accountant said that the only profitable member through the pandemic in the Mannat household was Gauri Khan, who actually showed some profits because Shah Rukh wasn’t doing any movies. Of course, the kids are not earning,” said KJo. “So how does it make you feel that you built this empire on your own,” he asked Gauri Khan. To which she replied, “Well, the chartered accounted has obviously exaggerated this but I take it as a compliment and well I just think I do things with pure love and passion and there is no goal or there is no ambition.”

Gauri Khan added that she is not very ambitious and said, “I am not like really ambitious you know. I feel satisfied and I feel my life is complete when I am at work. So that feeling what you love, you enjoy what you do, and then it finally takes you to a place when you are tapped on your shoulder and your husband says “well done.”

When asked, “How difficult is it too shrug off that tag that you are Shah Rukh Khan’s wife? ” He also asked her if it affects the clients when she walks into a meeting, do they carry that baggage? Gauri’s reply: “Yes absolutely, there will be times when I will be taken as a designer because of who I am because they will get that mileage that they get you know… But let me tell you that it is not always the case. There are times you know when you are not going to get a particular project because of the baggage. Sometimes people do not want to get attached to the baggage of working with Shah Rukh Khan’s wife. It works against me 50% of the time.”

Gauri Khan is an interior decorator and she owns the plush Gauri Khan Designs in Mumbai. She has given makeovers to several suburban Mumbai restaurants and celebrity homes over the years. She has decorated homes for several Bollywood A-listers. She has designed restaurants like Arth and Sanchos. She also designed Alia Bhatt’s vanity van. Other than that, she is a film producer and made her debut as an author with a book titled My Life In Design.